The Witch Demands a Retraction: Fairy Tale Reboots for Adults 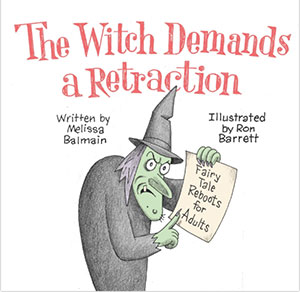 The Witch Demands a Retraction: Fairy Tale Reboots for Adults

A poetry chapbook from Melissa Balmain, from Humorist Books, available for purchase at Amazon, Barnes and Noble, Foyles, and other online
and offline bookstores worldwide.

Pinocchio Runs for Office, The Peeved Piper, Not So Snow White and so many more in this twisted collection of adult fairy tales!

This hilarious collection of poems by Melissa Balmain puts a grown-up, contemporary spin on the stories and characters we all learned as children, from Little Red Riding Hood, to the Three Bears, the Pied Piper, and Cinderella; each delightfully depicted in full-color by Ron Barrett, (Cloudy with a Chance of Meatballs) one of the best and award winning illustrators in the business.

Early Praise for The Witch Demands a Retraction:

“If you’re looking for the perfect bedtime poetry to send your little ones peacefully to dreamland, keep moving. In The Witch Demands a Retraction, Melissa Balmain’s poetic retakes of classic fairytales, ‘happy endings’ means something else, and Mama Bear finds a clue in her bed that Goldilocks was not after the porridge. Witty, cringey, and hilarious. For every parent who wants a break from sincerity, and for every bad aunt or uncle looking for the perfect gift — this is your book.” — Tom Bodett, author and NPR personality

"Like Leopold and Loeb, Balmain and Barrett are a pair that will go down in history—not that I’m implying anything. It’s just that when the right pair gets together at the right time, great things happen. And if a cousin or two had to die for this book? Totally worth it." — Michael Gerber, Publisher, The American Bystander

"Does anyone say, 'OH NO SHE DI-INT!' anymore? Because that will be your response to basically every poem in this treat of a book. Balmain turns every fairy tale on its head and shows us its panties, none the worse for wear. Just don’t be drinking anything while you read, because these verses are a recipe for spit takes. Balmain has a warped mind and astonishing wit matched thoroughly by her warm heart. Come for the fart joke, stay for the sly and bawdy feminism."— Faith Salie, comedian, author, journalist, seen & heard on CBS, NPR & PBS

Melissa Balmain is a writer, teacher, and recovering mime. She edits Light, America’s longest-running journal of light verse. Her full-length poetry collection, Walking in on People, was chosen by X.J. Kennedy for the Able Muse Book Award. Her new, shorter collection is The Witch Demands a Retraction: Fairy-Tale Reboots for Adults, illustrated by Ron Barrett (Humorist Books). Balmain's poems and prose have appeared in such places as the American Bystander, American Life in Poetry, the Hopkins Review, McSweeney's, the New Yorker, the New York Times, Poetry Daily, Rattle, and the Washington Post. Poet Laureate Billy Collins has described her work as "an infectious, often hilarious blend of the sweet and the lethal, the charming and the acidic." Pulitzer Prize winner Gene Weingarten has called it "extremely irresponsible.”